"Oh my God, it was horrible!" claimed John Mendoza of Elkview, WV. "They just came by the hundreds! Straight from the trees! They made the most horrible noise, as if Satan was coming straight from Hell to reclaim the dead! I will never come back to the Gorge!" 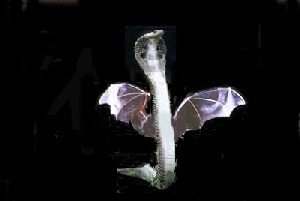 Earlier this week several campers in the Red River Gorge claimed to witness a spectacularly horrifying event. Hundreds of Volatilus Serpens, or flying snake, flew from their native breeding grounds in Eastern Kentucky to their winter homes in South America. This is a rare sight indeed, as the Eastern Flying Snake is rarely seen by human eyes, for it is a nocturnal animal and has a notoriously long breeding cycle.

"The Eastern Flying Snake has been known to become extremely aggressive during its breeding season," claims Fred Clymin of the Center for the Institute of Studies, "and has been known to kill animals much larger than it size such as deer and bears."

Fortunately, the Eastern Flying Snake rarely attacks people. However, Kentucky mythos claims a much larger flying snake to exist, one that has killed many people in the past, and has been labeled "The Devil's Constrictor" by the locals. This beast has been known to creep up on unsuspecting victims and jump on them, constricting them to their demise. Reports of this creature measuring up to twenty feet in length, and having the ability to glide from the trees up to one hundred feet away have made their way into the local culture, however, no empirical evidence has been found to support these claims.